Welcome to another Twitch stream recap blog! We’re hosting biweekly streams on our Twitch channel where we talk to Torn Banner developers, community members, and we’ll soon be debuting upcoming features! Be sure to follow us over on our Twitch profile so you get notified every time we go live. 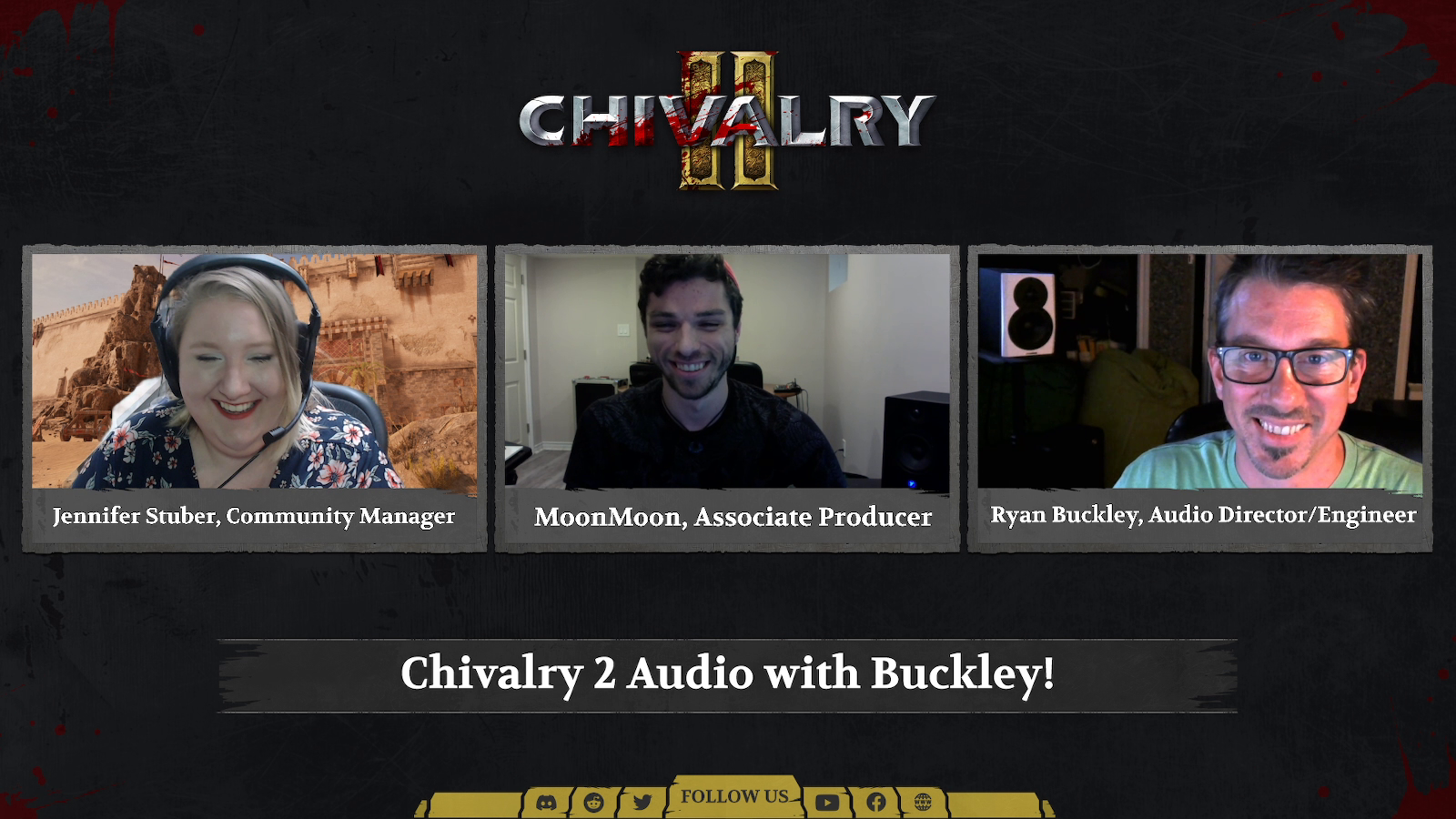 You can watch a VOD of our latest stream here on our Twitch channel, or archived on our YouTube channel below.

In this stream we were joined by Ryan Buckley, who is the Audio Director and Audio Engineer for Chivalry 2. He has been a member of the Torn Banner team for many, many years and also did the sound design for Age of Chivalry and Chivalry: Medieval Warfare. You could say he knows his way around by now! There are over 70,000 different sounds so far in the Chivalry 2 library, which is an insane number, all to help flesh out the audio landscape.

Buckley, with the help of Moon, goes into detail on how all of the weapon sounds in Chivalry 2 are made. There is a big emphasis on using several sounds to make up a single weapon sound, and having these sounds randomized so you never hear the same sound twice in a row. This helps with player emersion and allows for the sounds to feel real and natural to the ear while playing. In order to do all of this, our audio engineers use something called Wwise. For every weapon that needs sounds, they also need different and unique sounds for every single attack type that the weapon can do. Below is a screenshot of only some of the sounds made for the Greatsword. 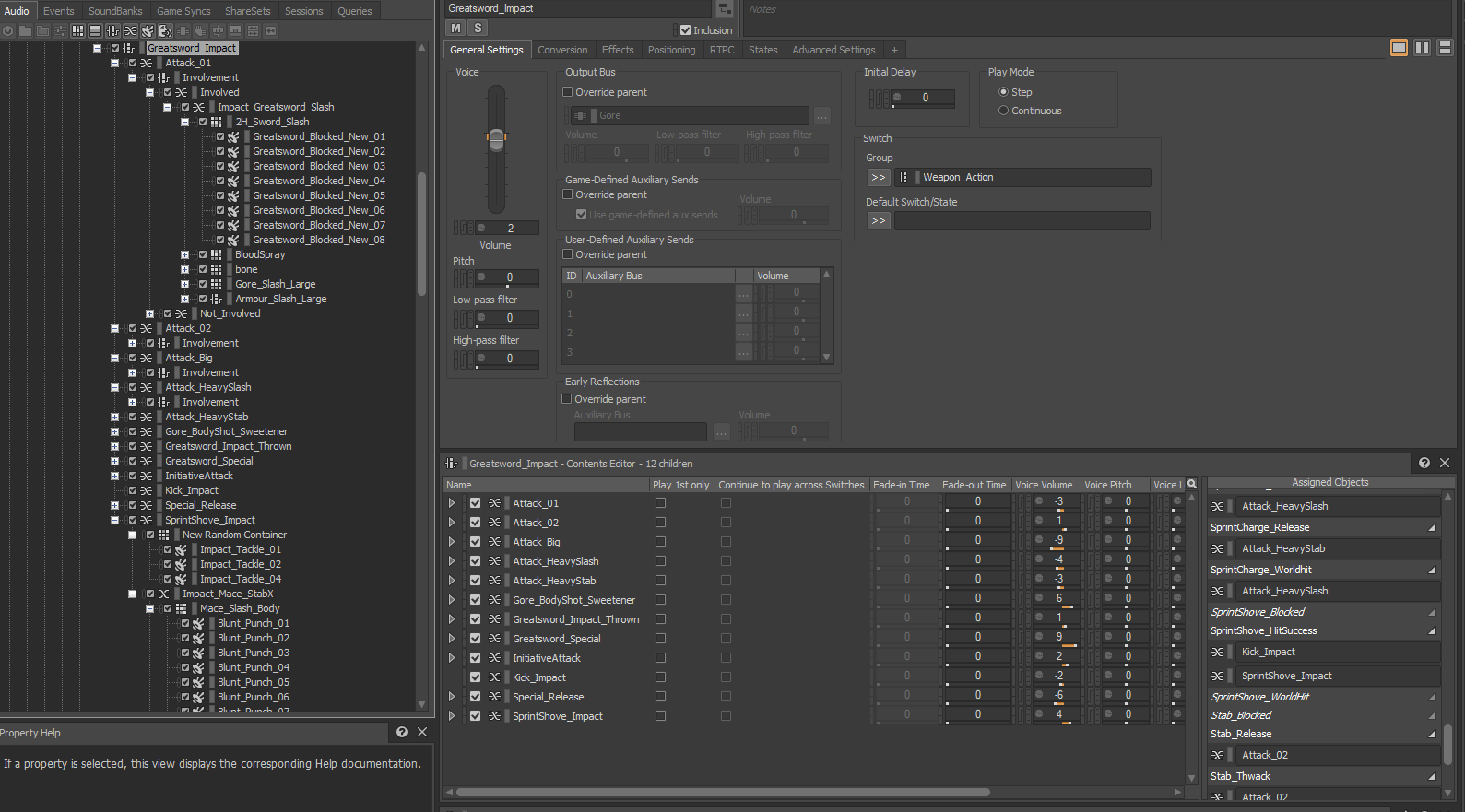 We’ve heard many compliments regarding the horse audio since the Tenosian Invasion update as well. One of the key components on making the horses sound grounded and a real part of the battlefield is how they sound as they’re running around the player. This has to do with attenuation and how the sounds move around you while you’re also moving around too. The hoof beats start of distant and grow to a booming stampede as they run past.

Generally one of Buckey’s focuses is how the sounds would be impacted by the environment that they are played in to made them feel more grounded. How the sounds echo or reverberate off the environment whether you’re inside a castle or out on the grassy battlefield, all of these things are taken into account.

While the bulk of the audio work is sound effects we can’t forget about the iconic voice characters that you can choose from. We recently added four new voices, and have a selection of both male and female voices to choose from for all three factions. One of the most difficult parts of recording voices that you might not have thought about is all of that screaming they have to do! Voice actors have to be willing and able to do many takes where they’re screaming into the microphone and shredding their voices. It’s definitely a challenge recording session to do, but Buckley notes he rarely needs the actors to redo their lines because they get so into the recordings their doing.

One of the new voices this update, the Grizzeled Sentinel, was done by Jas Patrick who is a returning voice actor for Chivalry 2. Jas also recorded for the Imposter! Below is a reel of his Grizzeled Sentinel lines that you can equip in-game right now.

If you’ve heard the new music brought into the game in the Tenosian Invasion update, you may have heard a wonderful and angelic female voice featured. Here’s a peak behind the scenes at that recording.

We can’t write a post about audio without talking about J.D. Spears, the man behind the music of Chivalry 2. JD has composed many tracks for all of the different scenarios that you hear music in-game. This includes, but is not limited to, warmup music, dynamic music during gameplay, match ending music, map specific music, the main menu music, and more.

Be sure to follow the Torn Banner Studios Twitch channel and join us for our next Twitch stream on June 30th.

You can always stay up to date on the bigger items the team is working on at the Chivalry 2 Road Map. And don’t forget: for help be sure to visit the Chivalry 2 Knowledge Base and Support Site, community discourse – Discord, follow us on Twitch, and read all the latest news on our Social (Twitter & Facebook).